Returning to Rome after far too many years contrasted the familiarity of its fabric with a change in its character.

In the 18th Century Rome was the destination of choice on the Grand Tour, and it continues to be popular in the age of the “City Break”. As the world reopens after the pandemic lockdowns, the appetite for travel seems unquenchable. European destinations like Rome, Barcelona, Amsterdam, Venice, and Lisbon are back at capacity. Florence’s Hotels were at 90% occupancy last week (April 2022) for example.

What does this mean for the health and future of our cities? Pessimistically our European cultural capitals are in danger of becoming theme parks, the centres handed over to itinerant hoards who trail through the streets following umbrellas and flags. The economic impact is significant, whilst hotels, restaurants, and museums prosper, Airbnb wipes out the rental market for the locals and small retail units are converted to food and drink outlets and souvenir shops as these cities struggle under the volume of tourist traffic.

My memory of Rome is formed by Giambattista Nolli’s plan which was drawn in 1748. It is a fascinating and influential architectural document envisaging the city as a poche of public space, the interiors of churches, courtyards and gardens reading as public realm. 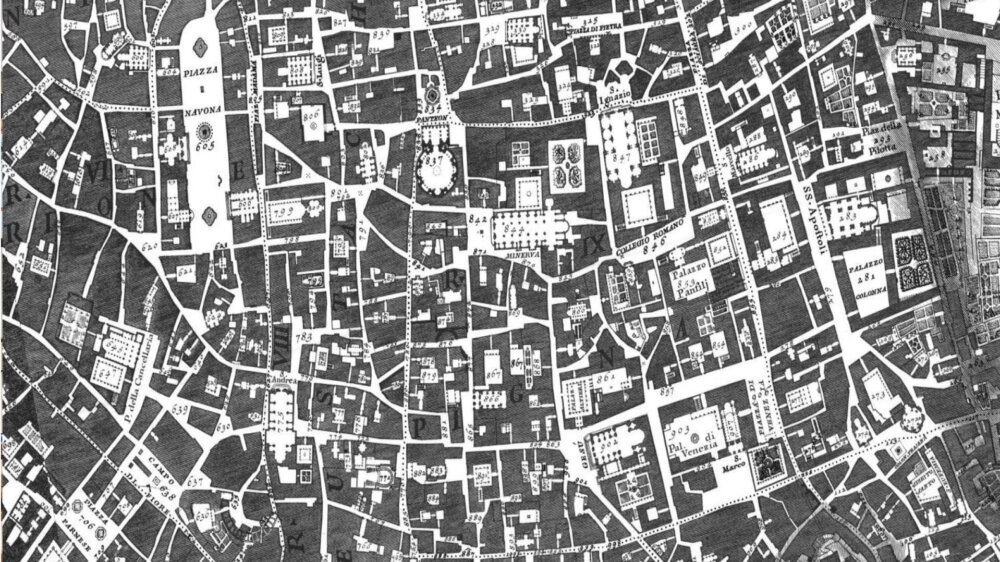 My thesis design back in 1980 situated an apartment building in the Roman Forum and I spent hours drawing and photographing the stones and architectural remnants of this romantic landscape. As recently as the 18th century it was grazed by cattle, only to be excavated when the amateur archaeologists arrived in the 19th Century. In the 1980’s it was public space, open to all, an integral part of the public realm of Rome. Sadly, since 2008 it has been gated and privatised, access is by ticket only. 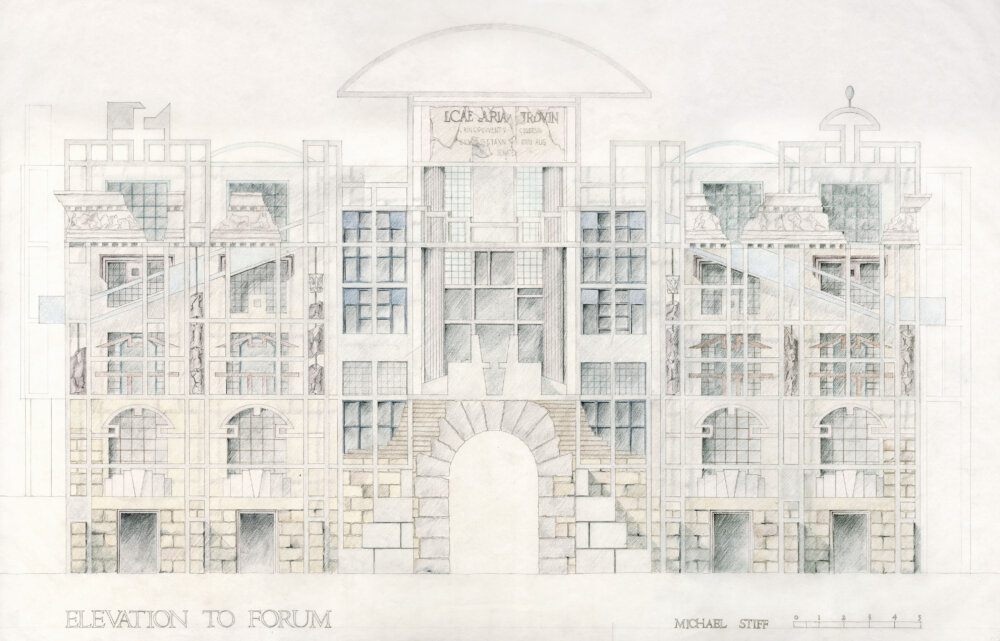 There is no doubt that the volume of tourists has in some ways necessitated the privatisation of what was public space, but it totally changes the democratic landscape of the city. Indeed, the Nolli Plan would look very different today, it would contain a lot less white space. For example, like the Forum and the Colosseum, you can no longer walk into the Pantheon. The Basilica of St Pietro has at least a 45-minute queue which encircles Bernini’s piazza, in fact the Bernini arcades are no longer permeable, permanent railings prevent free movement. As a result the whole space has lost its drama and porosity to control and order the behaviour of its visitors. A visit to the Sistine chapel is comparable to the immigration hall at Terminal 5 on a bank holiday weekend. It will only get worse as the decline of Christianity renders the greatest monuments of Europe redundant, many churches are now closed, and our great art galleries will struggle to survive without “blockbuster“ and populist shows. 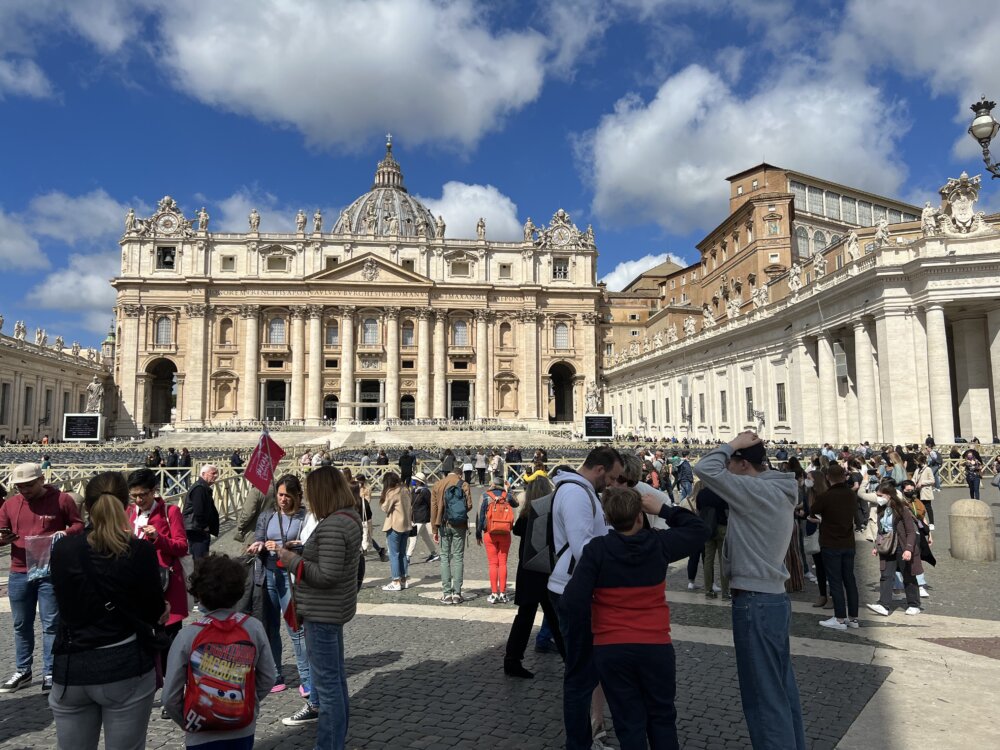 Because our cities are wonderful places, joyful, pleasing and beautiful, they are victims of their own success. Tourism has no doubt been boosted by cheaper air travel and better trains, whilst social media sells the dream. Unfortunately, there is a real possibility that our cities will become Disney-fied parodies of themselves. Sadly, they will no longer be living communities, Venice for example now has a resident population of 62,000 half that of fifty years ago, and there is genuine concern amongst local politicians that it will be devoid of permanent residents, Venetians, in thirty years.

In Paris the migration of the residents from the historic core to the Banlieues has created enormous social problems, it is a broken model that is unfortunately duplicated across the cities of Europe, this is not the solution to the problem. Affordable spaces to live work and trade need to be encouraged and those that still exist need to be protected. Governments need to act quickly so that the people who still live and work in our cities are not priced out by tourism. There are some easy wins, controlling Airbnb, careful vetting of planning applications, zoning and protecting uses to safeguard local homes and amenities are a few examples. 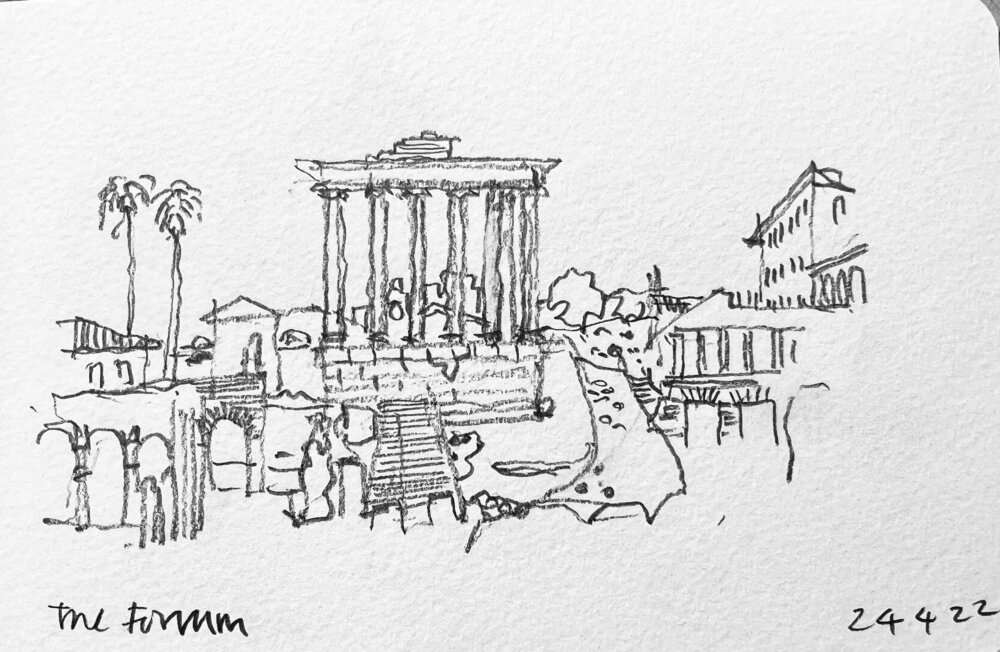