A trip to Turn End

Turn End in Haddenham, Buckinghamshire, is the home and was the office of Peter Aldington, (one half of Aldington and Craig), an architect with more listed buildings to his name than any other, mostly one-off houses or small housing developments.

The practice started in the early 1960’s, Aldington was an architect and Craig came from an advertising background, although according to Aldington he had a ‘pedigree’ of design in his blood. Intriguingly Aldington packed in being an architect in 1986, no doubt fed up with an obstructive planning system that was becoming increasingly regulatory; instead he concentrated on garden design. The practice carried on with Paul Collinge continuing to work in a way that reflected the architectural language of the original practice.

The work that they completed in those first 25 years or so is perhaps some of the most important Post War English domestic architecture. It is easy to draw references from Scandinavian architects such as Aalto and Utzon, with the appropriate selection and use of materials, and the consistent refinement of detail. Similarly we are reminded of the Case Study houses of Eames, Neutra, Koenig et al. It is also difficult not to think about traditional Japanese architecture when experiencing the relationship between house and garden and the robust structural detailing that comes from the craft of building.

So this is a rich and fascinating architecture that is unexpectedly located in the rolling Chiltern Hills, and often in surprisingly inauspicious sites. This weekend (3/4 June 2017) the Turn End Trust organised a day of visits for a small group of enthusiasts to four of these houses, one from each decade from 1960’s to the 90’s. This was a rare opportunity to gain access to private houses in the company of the owners and the architect. 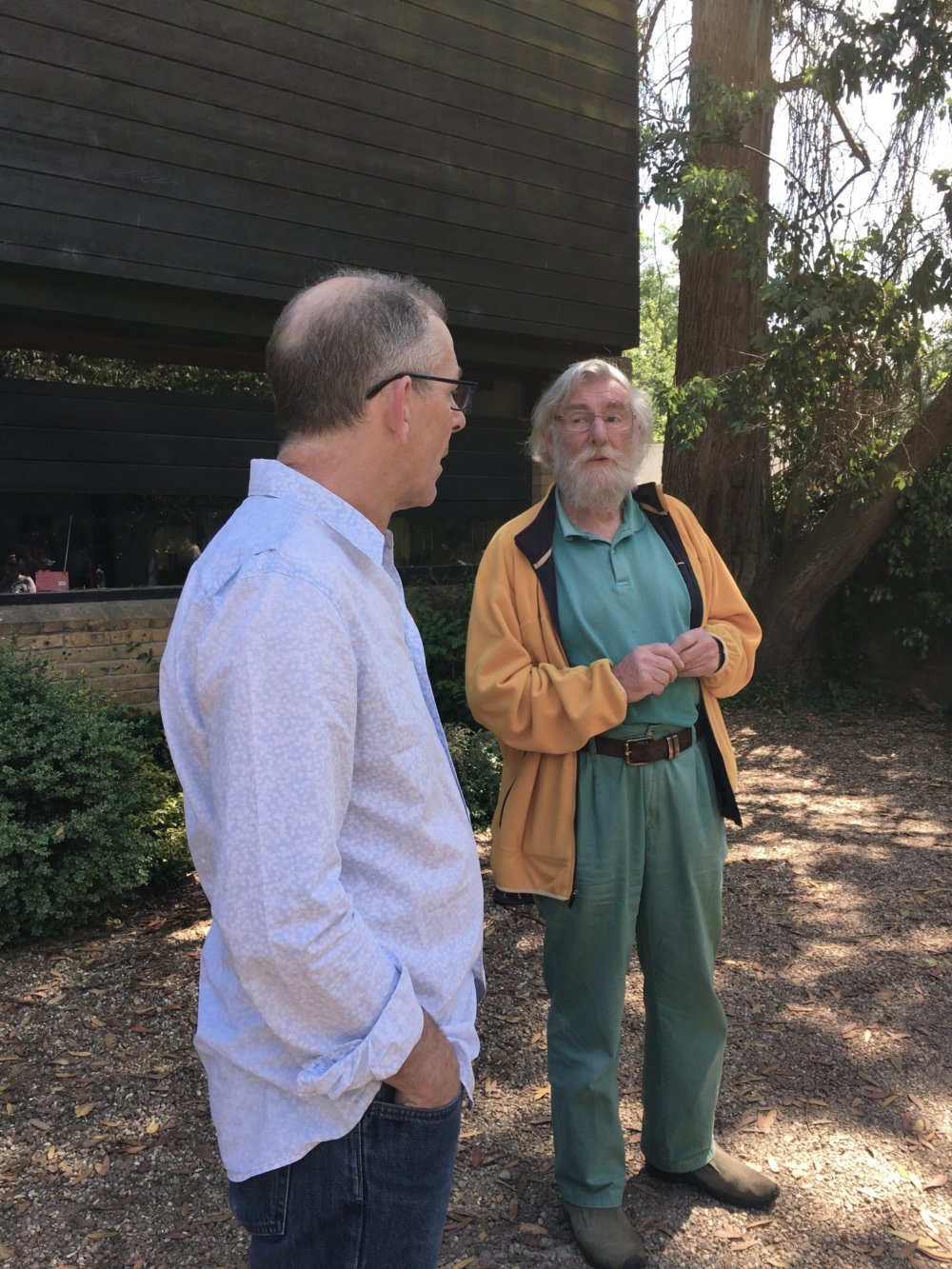 Clayton House was built in 1962-3 and is uncompromisingly modern, and perhaps, as Aldington said, the truest expression of his architecture. A compact thoughtful and elegant plan for a family and their children, working with a minimal palette of brick glass and timber this is a house of great beauty, homely but with a generosity of space that belies its size. Whilst the architecture references European modernism there is an English tradition here that goes back to Voysey, houses of rooms, windows set to suit view and function. There is an honesty of detailing and material, you can understand how this building was built. These themes would be explored over subsequent decades. 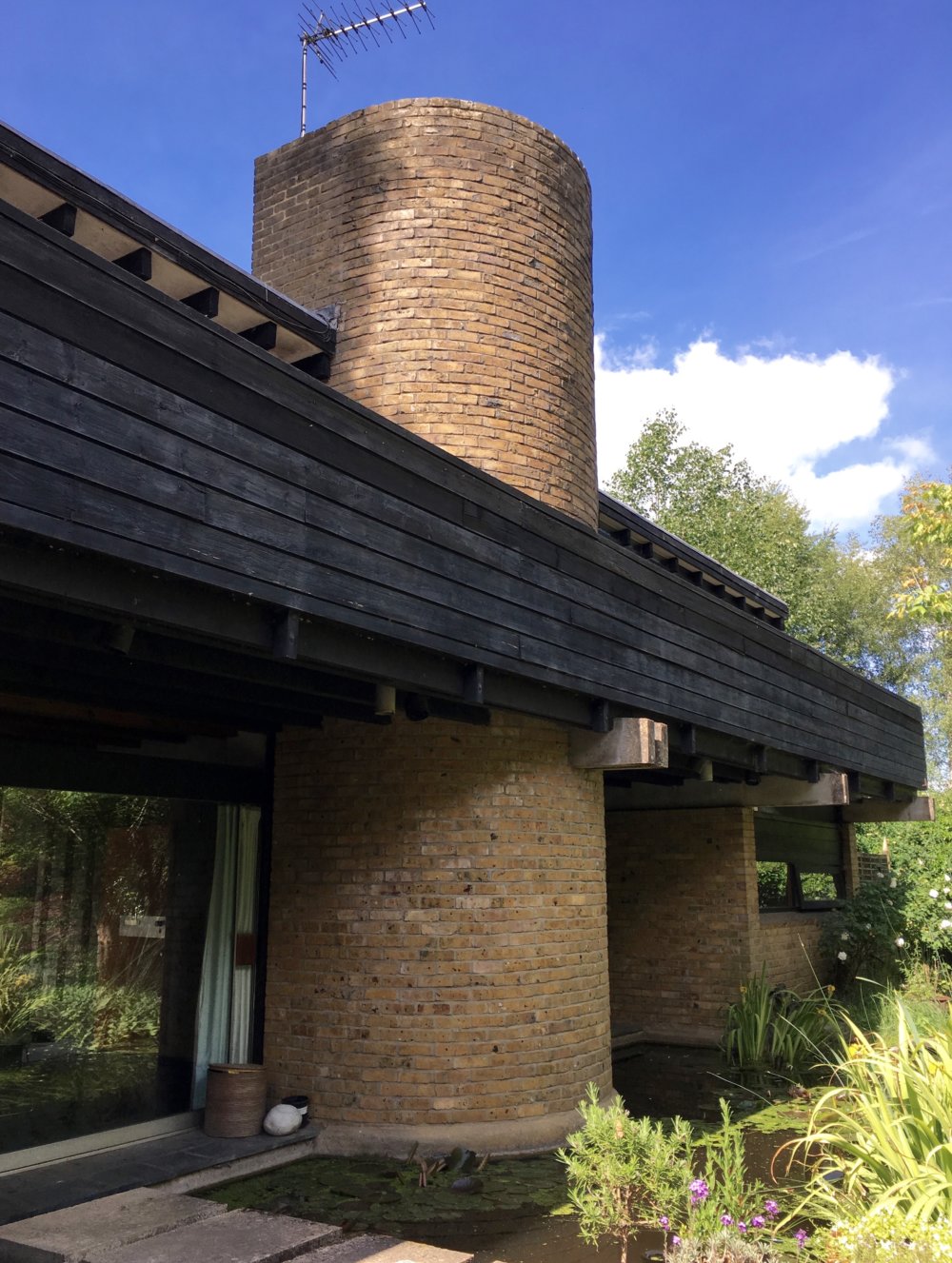 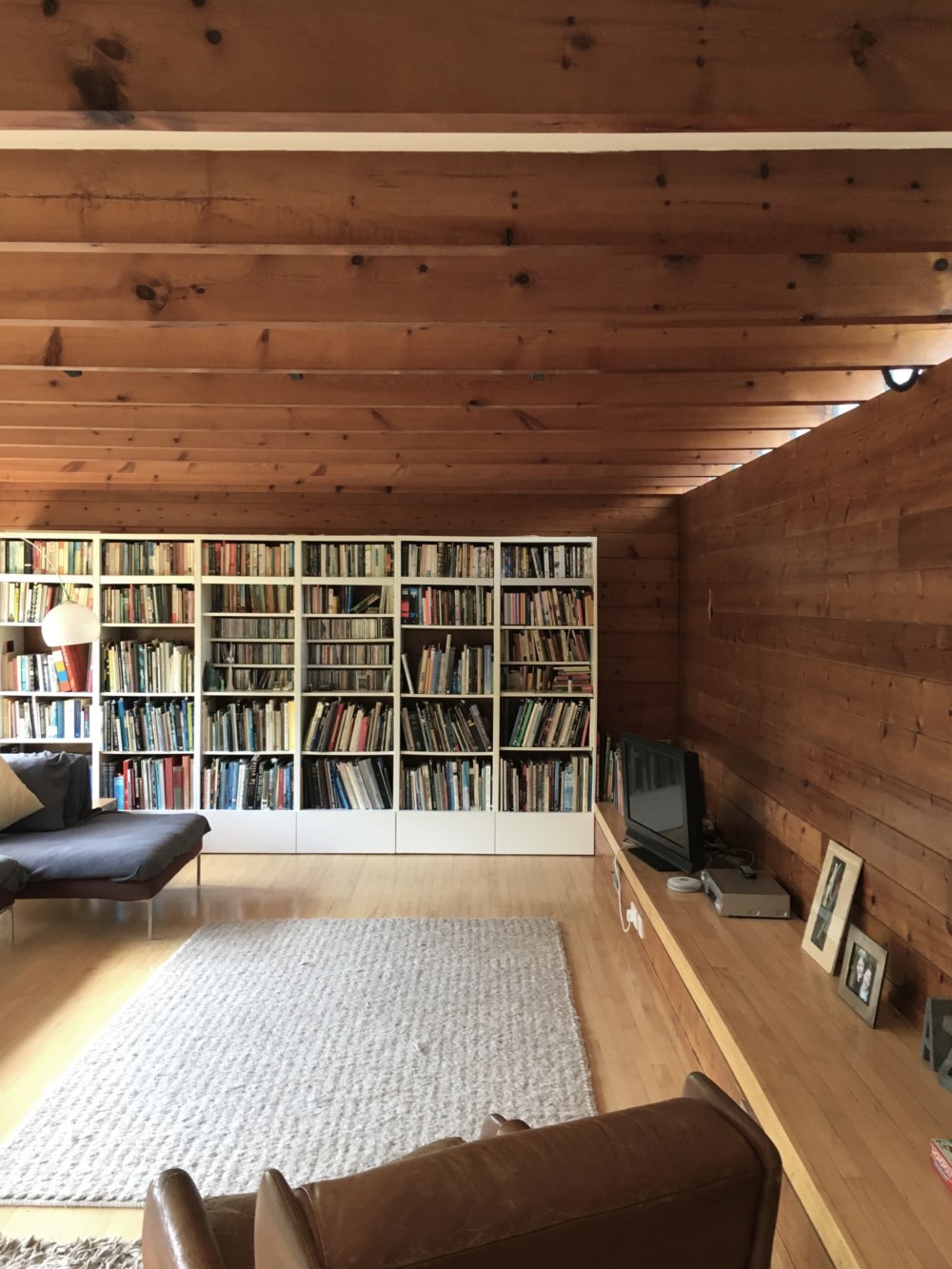 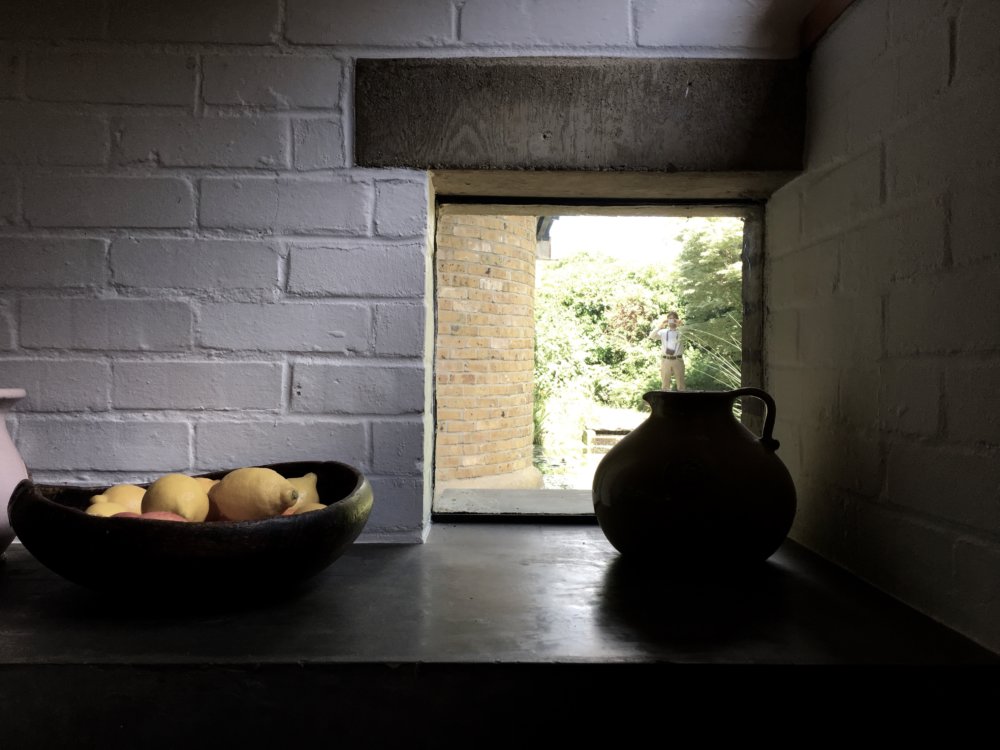 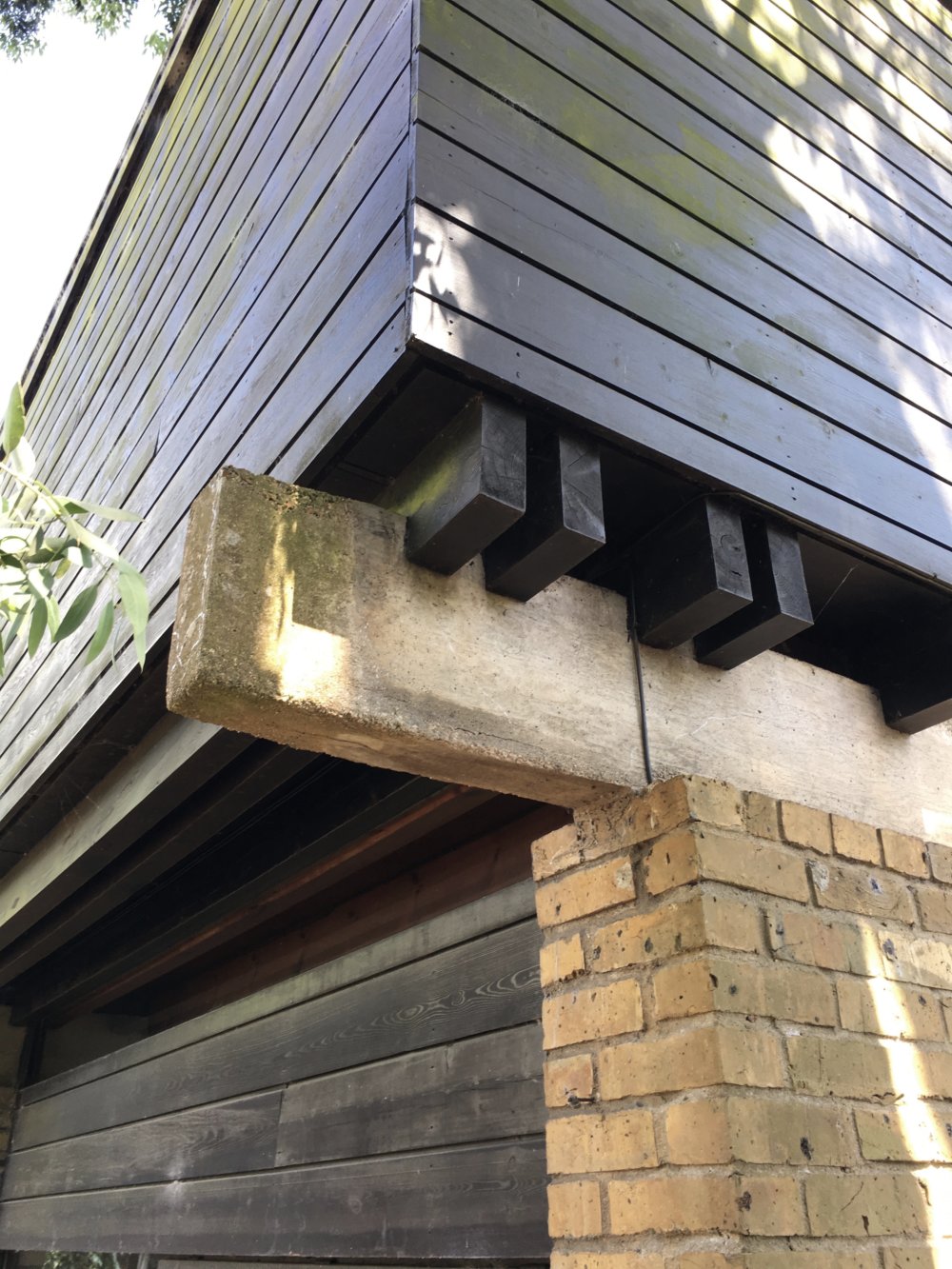 In the 1970s Peter (Lord) Carrington commissioned a group of estate cottages at Lyde End. These two bedroom houses are only 600 sq ft each, compact yet spatially clever, simply detailed with brick, dark timber and tile they still feel fresh. The relationship between the public area of the courtyard and the private open space that relates to the living space is exemplary. 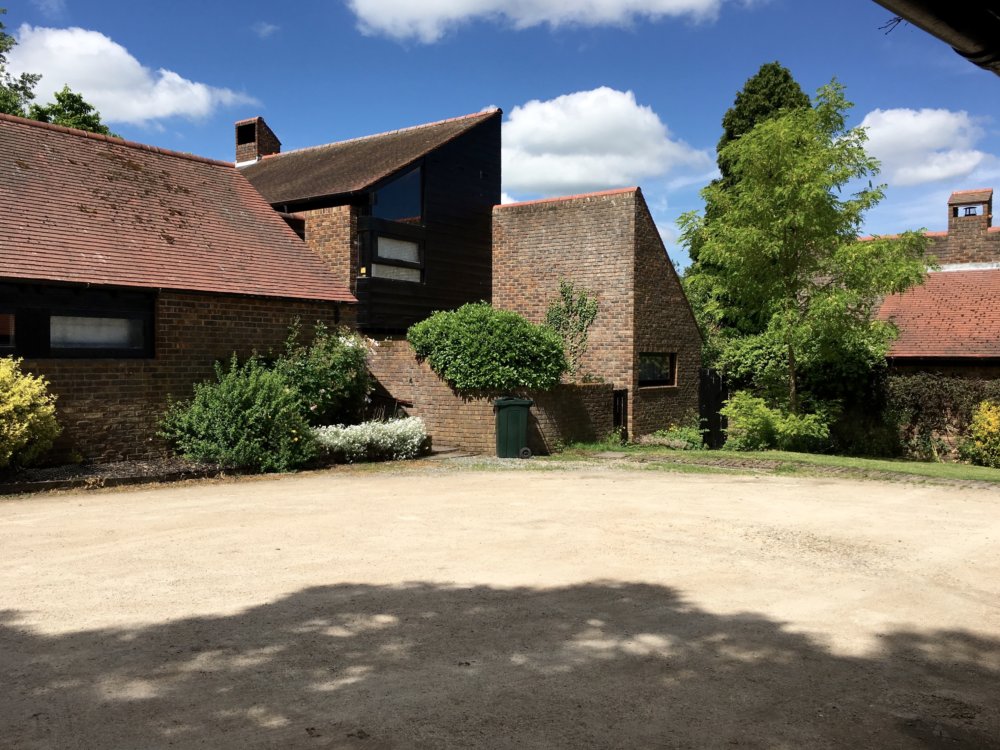 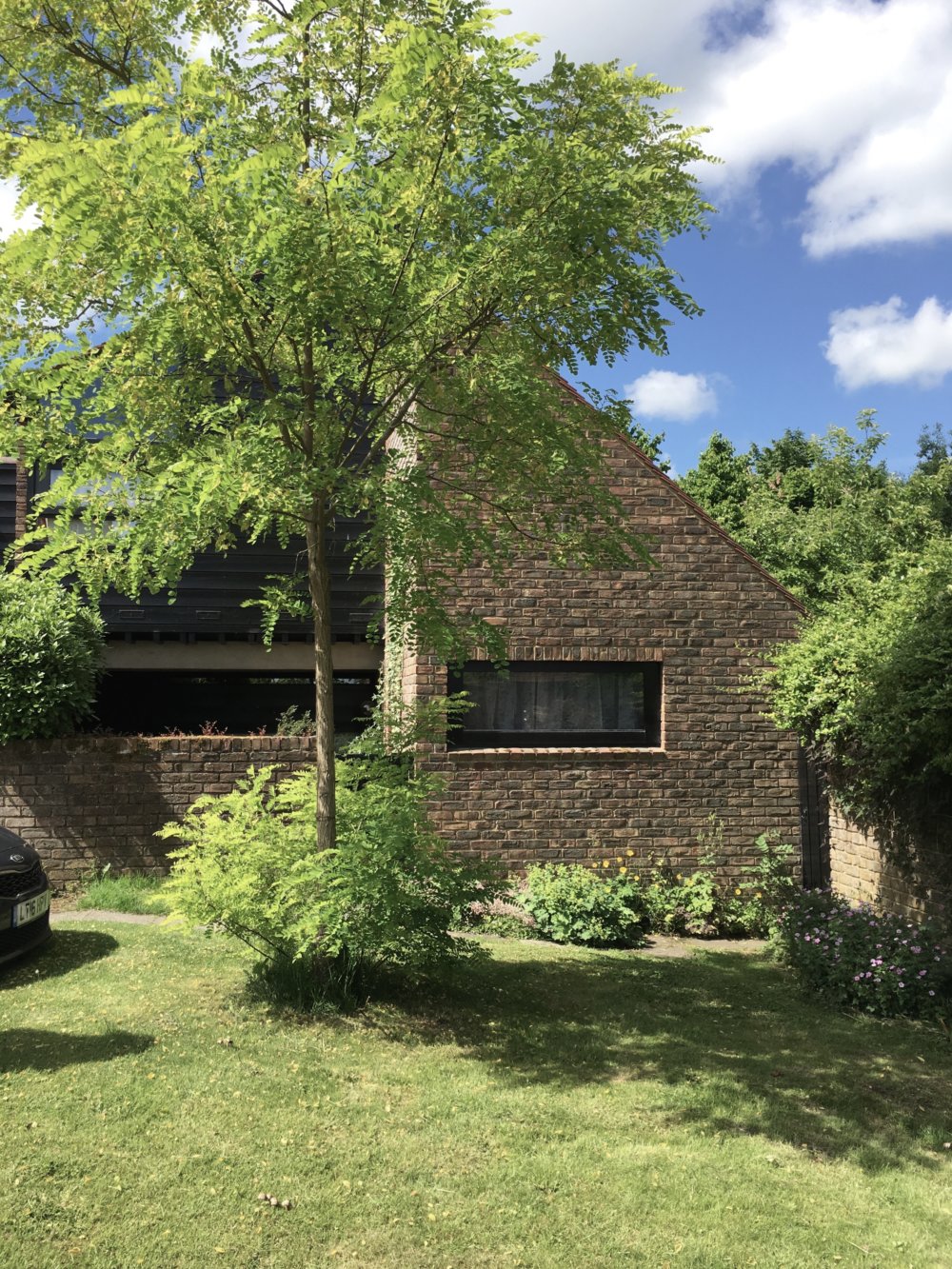 The last residential project Aldington built is perhaps the most surprising; The McManus house (1982) is an unprepossessing bungalow near Princes Risborough. What lies behind is completely unexpected, a single storey hi tech living room and kitchen ‘pod’ clad in insulated fibreglass panels. The cladding system was detailed by Tony Pritchard who worked with Foster on the Sainsbury Centre and the structure was engineered by the great Tony Hunt. It is an exercise in minimalism that is connected to the earlier projects by a fascination with material and detailing and the relationship between house and garden. It feels like the architectural equivalent of Bob Dylan going electric at the Newport Folk Festival in 1965. 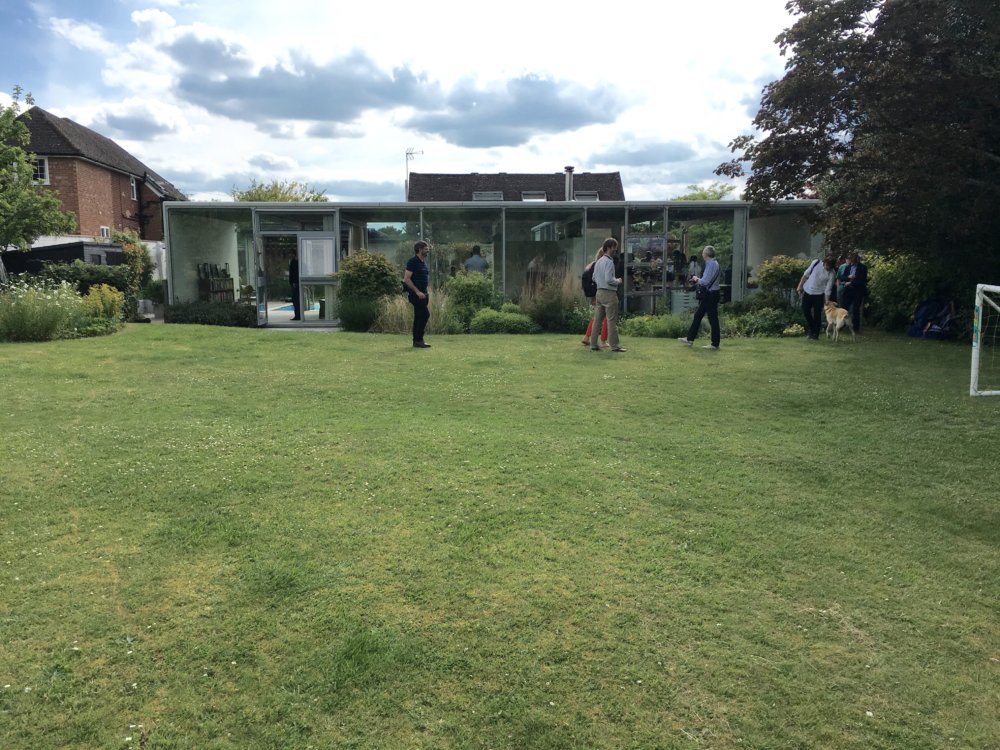 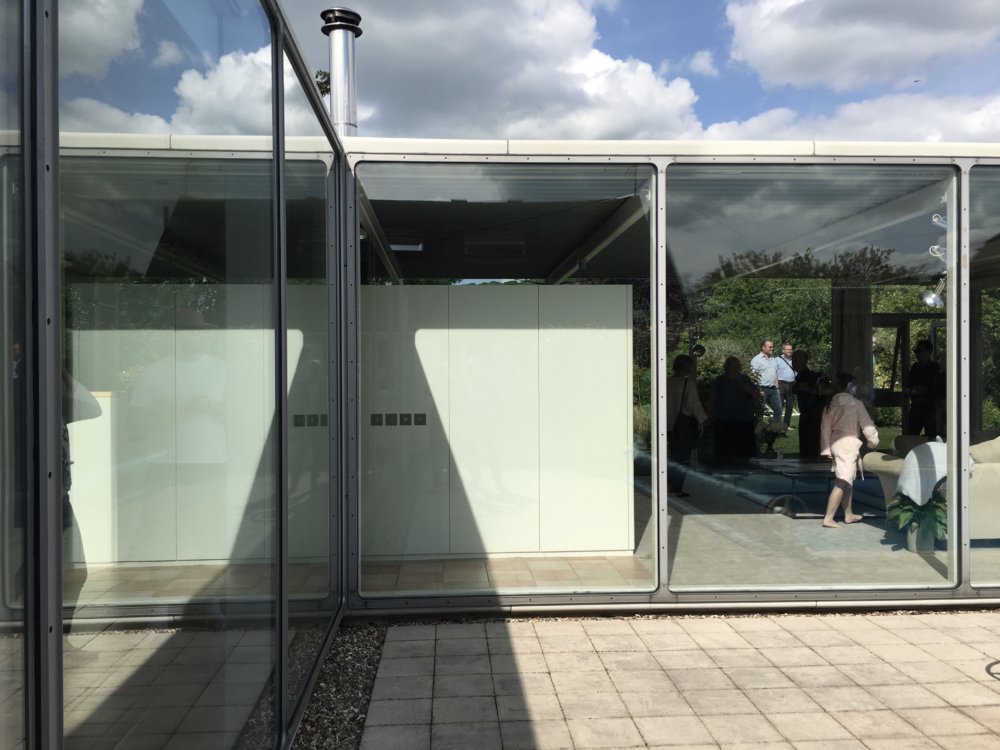 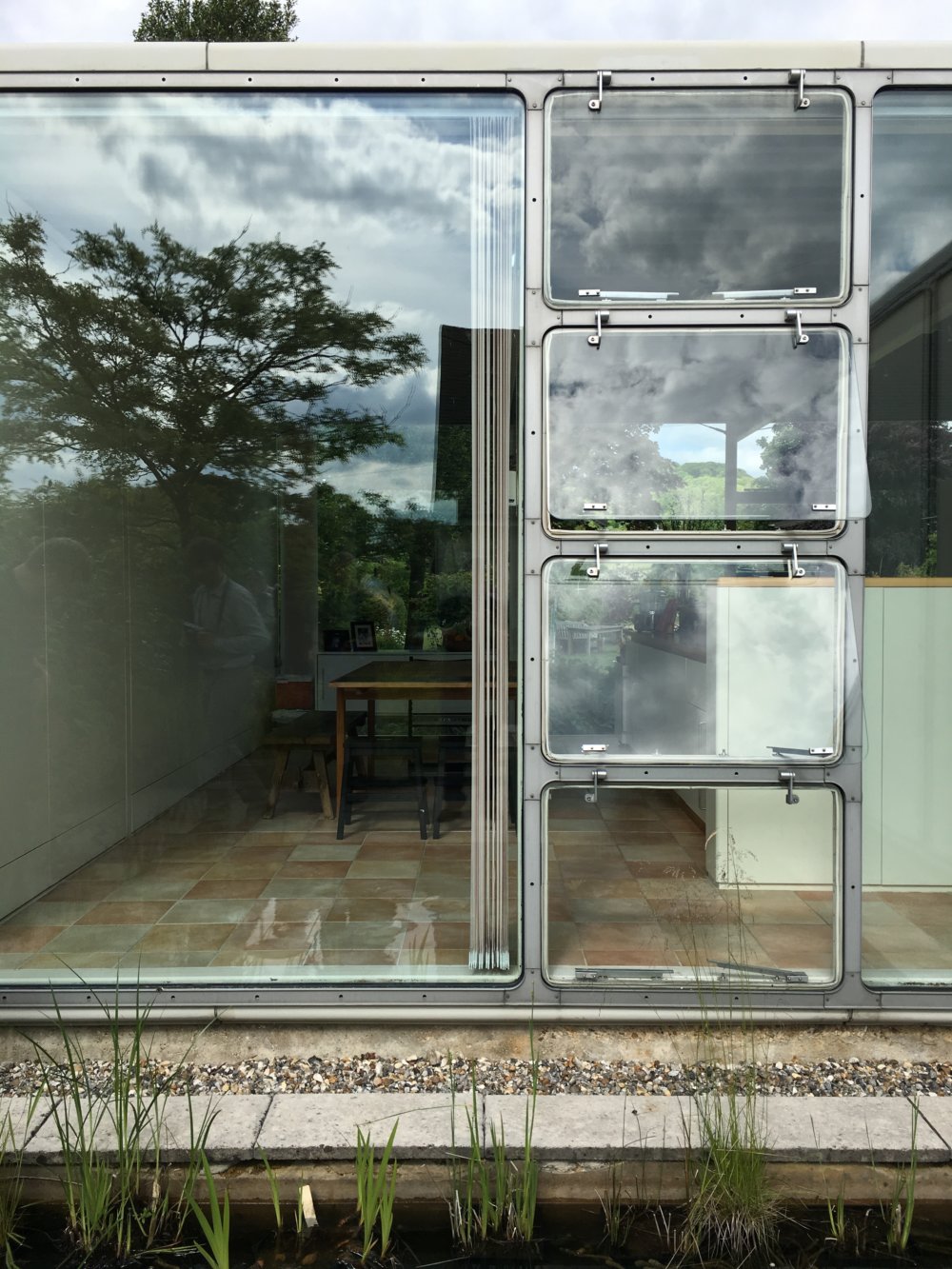 The fourth house was designed by Paul Collinge who continued the practice after the departure of Aldington and Craig. Coppice House was built in 1992 and Peter Aldington was responsible for the garden design. The original owner still lives in the house. There is a heritage of Aldington and Craig details, and the flow of space and relationship between the interior and exterior are clearly rooted in the earlier houses. 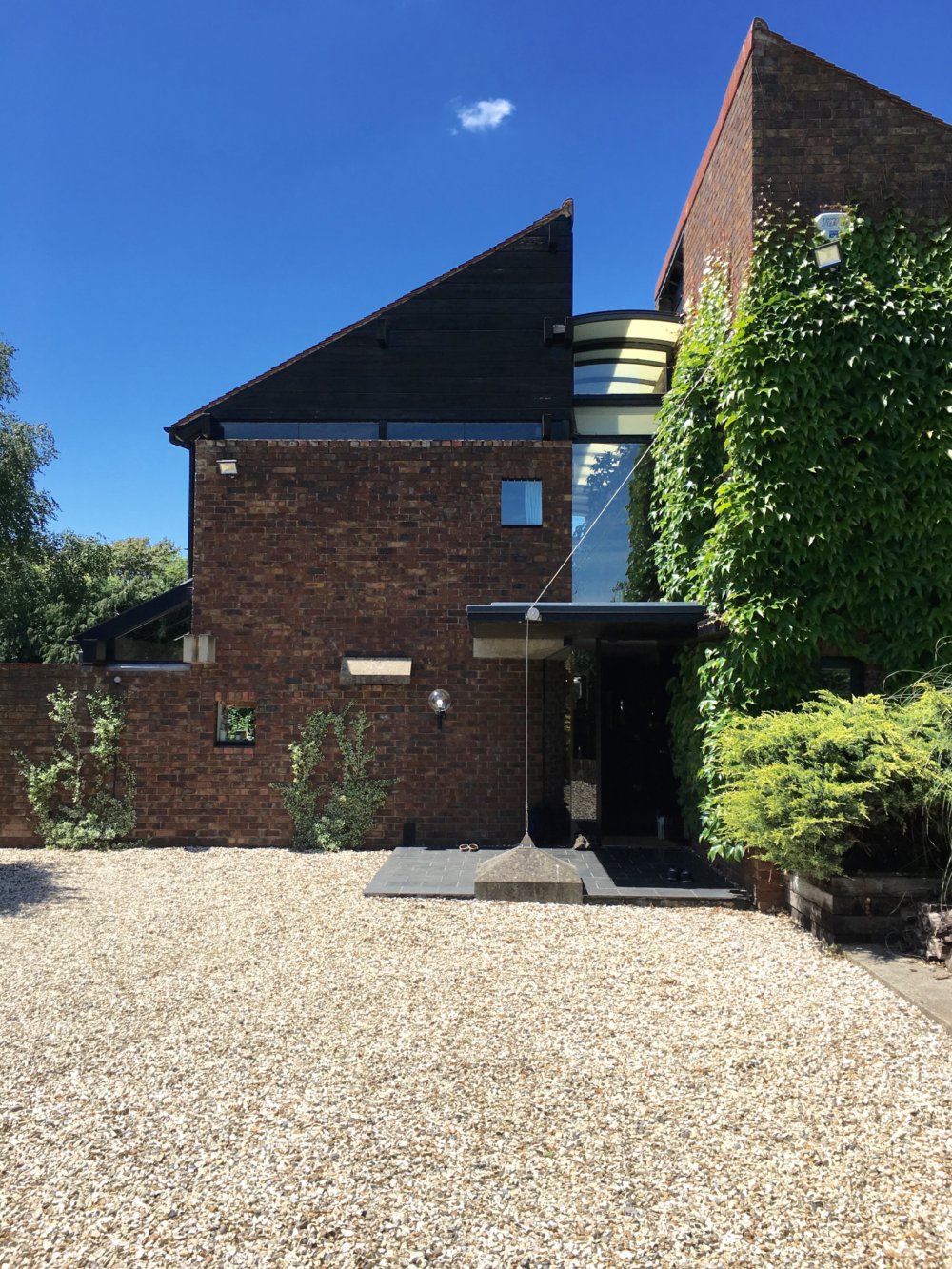 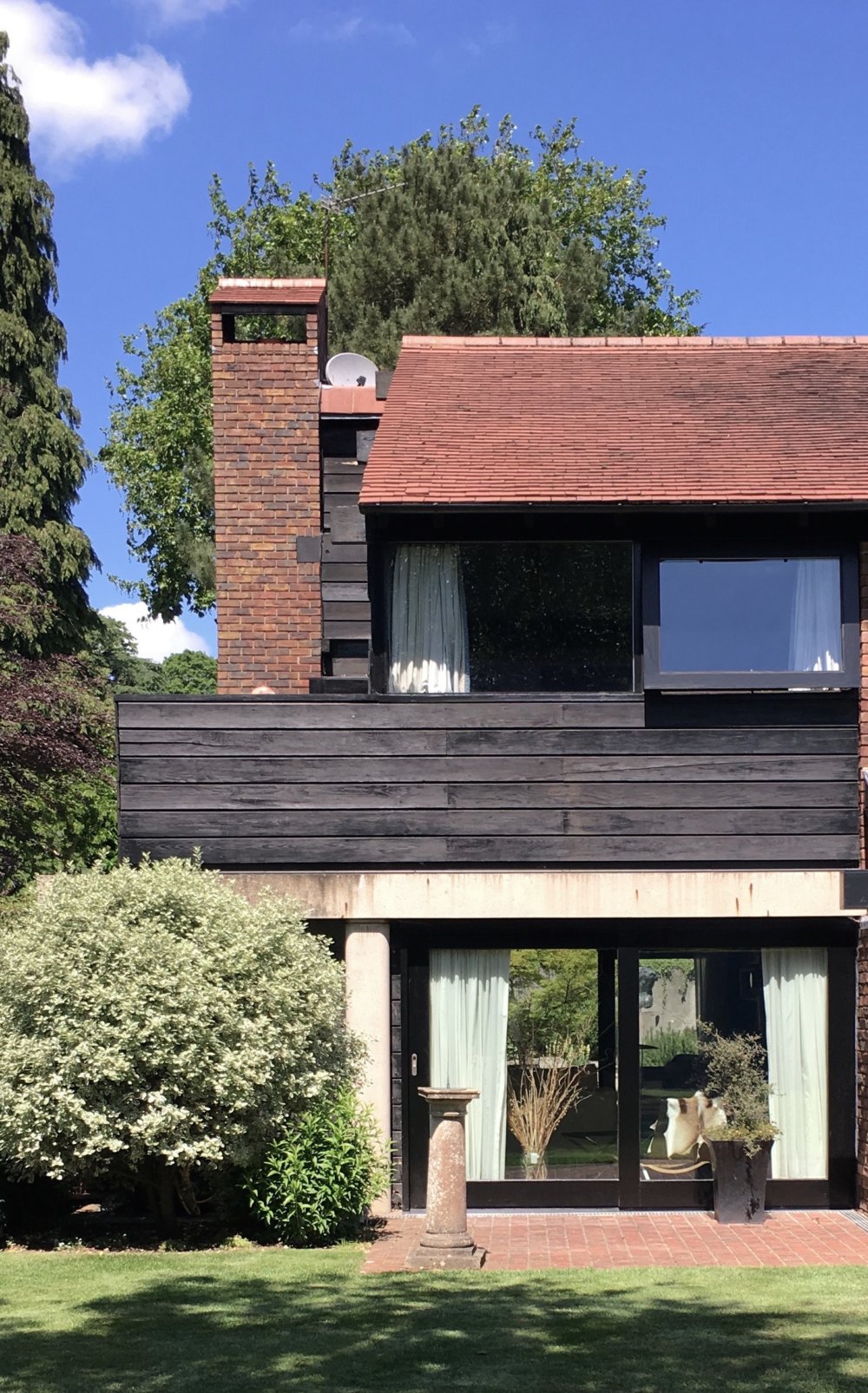 The tour finishes at Turn End, Aldington’s home and first project, a self build group of three houses. The gardens and the architecture strike an intimate balance that is rarely seen, like some of Lutyens and Jekyll’s more modest Surrey houses.  The Turn End Trust runs frequent open days, talks and events I would recommend them, this is architecture of the finest quality. 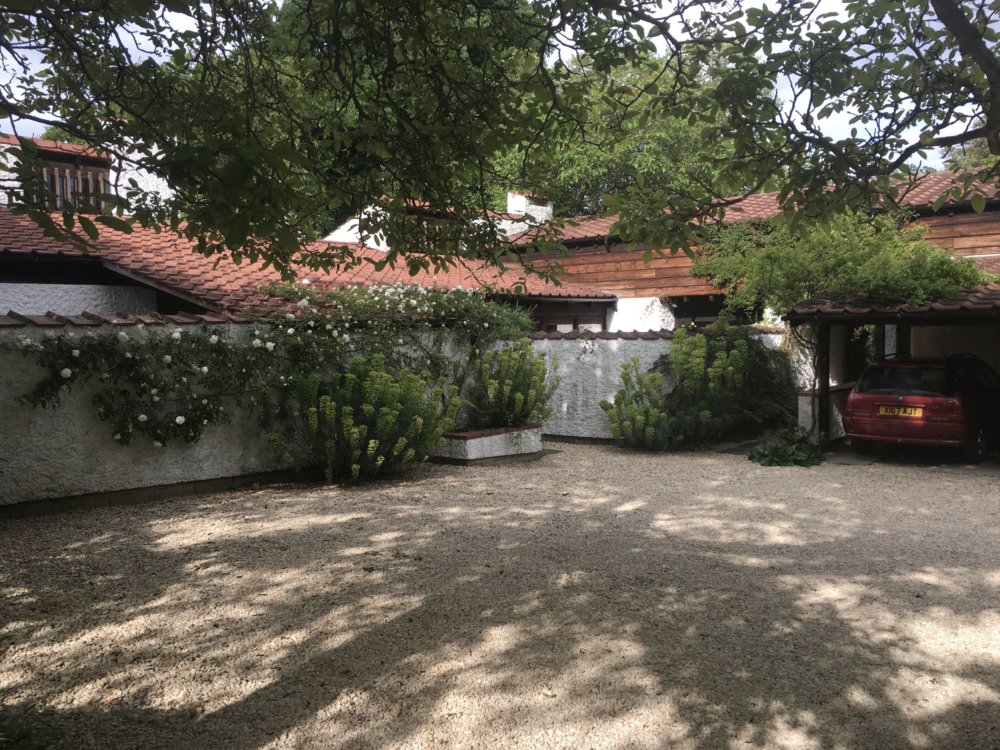 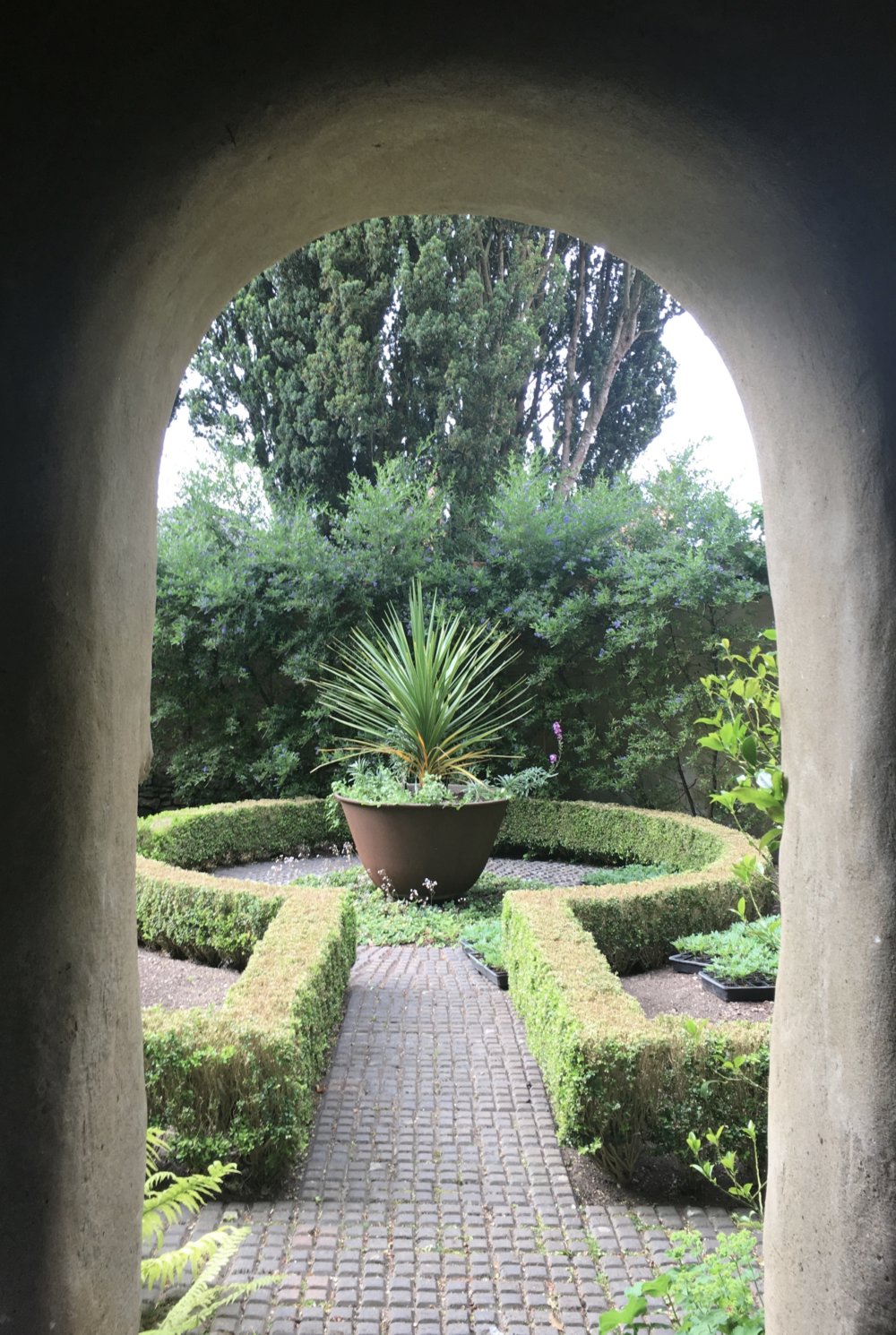